It is often argued that society should invest exclusively in research that is likely to yield immediate practical benefits. There are argument that this policy is unwise and counterproductive. Had scientists such as Faraday and Rontgen focussed their attention on socially relevant issues, we may never have developed X-rays and electric motors.

It is true that today’s basic science is very costly and that its relation to technological development is often indirect. Nonetheless, this work continues to have an enormous impact on our lives. Indeed, the curiousity-driven search for fundamental knowledge is at least as important to human health and welfare as the search for solutions to specific practical problems.

Sheldon Lee Glashow was born in Manhattan on December 5, 1932. He knew from an early age that he would become a scientist. When he was 10 years old, he became interested in the laws of falling bodies, and the age of 15 he helped his father equip a basement chemsitry lab. He graduated from the Bronx High School of Science in 1950. He received his B.A. from Cornell (1954) and Ph.D. from Harvard (1958).

A post-doctoral fellow at CERN (European Council for Nuclear Research) and at the Niels Bohr Institute in Copenhagen from 1958 to 1960, Glashow taught at Stanford (1961-1962) and Berkeley (1962-1966) before assuming a professorship at Harvard in 1966, where he remained into the 1990s. Beginning 1979 he was the Higgins Professor of Physics there.

Prof. Sheldon Lee Glashow was awarded the 1979 Nobel Prize for Physics for his efforts in formulating the electroweak theory which explains the unity of electromagnetism and the weak force. Throughout his career at University of California at Berkeley and the Universities of Houston and Boston he has done seminal research in the fields of elementary particle physics and cosmology which led to the prediction of neutral currents, charmed particles and intermediate vector bosons. He played a key role in unifiying the weak and electromagnetic forces and in creating today’s successful standard model of particle physics.

Sheldon Glashow became an assistant professor at Stanford University and then spent several years on the faculty of the University of California at Berkeley. In 1966 he returned to Harvard University as the Eugene Higgins Professor of Physics. He remained at Harvard, except for stays at CERN, the Massachusetts Institute of Technology (MIT) and the University of Marseilles.

In 2000 Professor Glashow became the Arthur Metcalf Professor of Mathematics and the Sciences at Boston University while remaining the Higgins Professor of Physics (Emeritus) at Harvard University. He has served the Science Policy Committee of CERN from 1979 until 1985, and in 2005 he became a Member of the Advisory Board of the International Peace Foundation. He was awarded the European Physical Society Prize for Particle Physics in 2011.

BINUS University in collaboration with
International Peace Foundation and BRIDGES will hold dialogue with
the Nobel Laureate at: 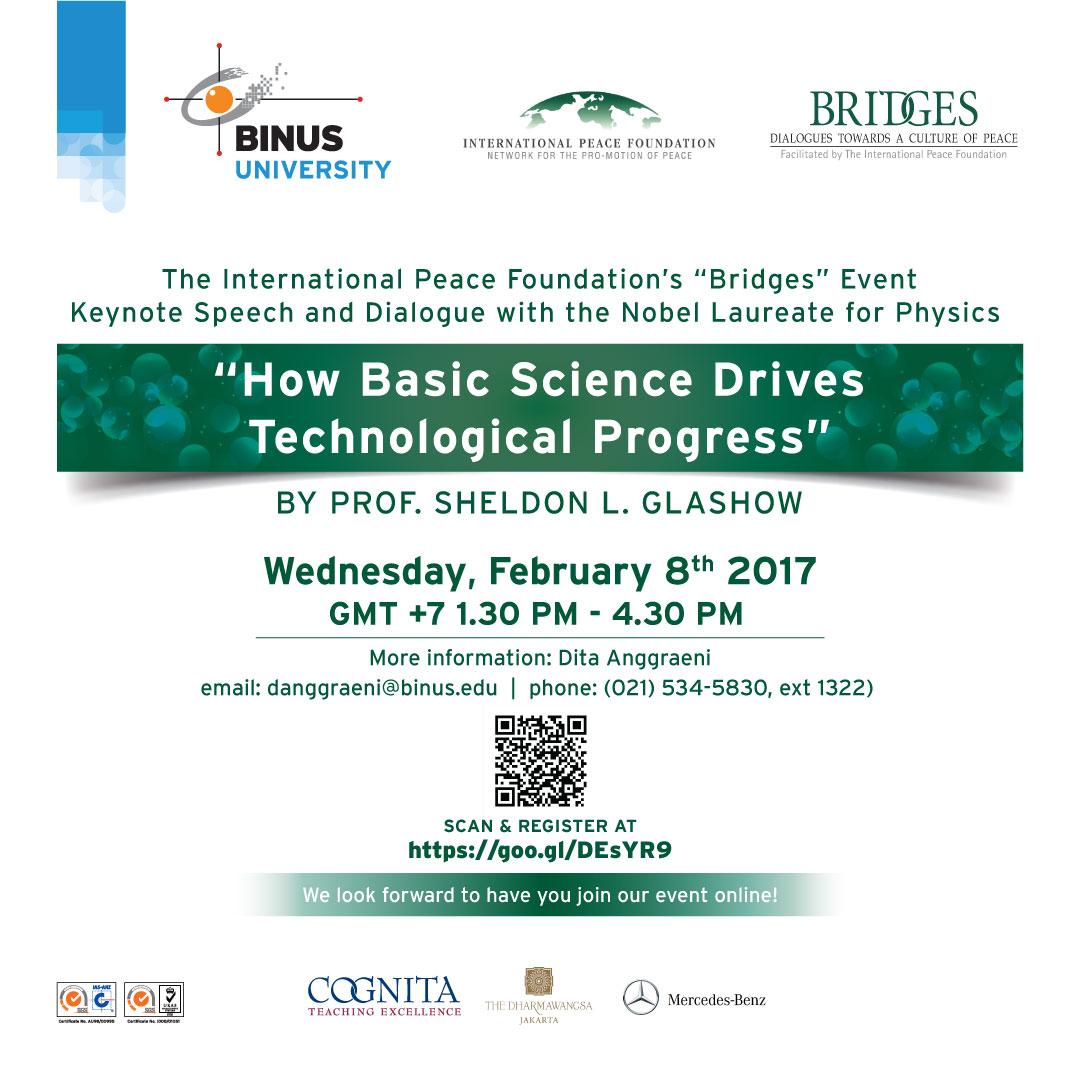